What is PWM and how it works

Pulse Width Modulation (PWM) is a technique for getting analog results with digital means. Digital control is used to create a square wave, a signal switched between ON and OFF. If you repeat this on/off pattern fast enough with a LED for example, the result is as if the signal is a steady voltage between 0 and VCC controlling the brightness of the LED.

The term duty cycle describes the proportion of ON time to the regular interval or period of time; a low duty cycle corresponds to low power, because the power is OFF for most of the time. Duty cycle is expressed in percent: 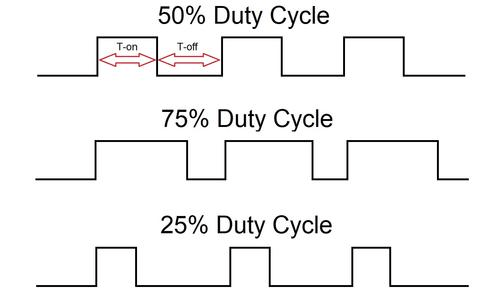 So at 25% duty cycle and 1Hz frequency, a LED will be high for 250 milliseconds and will be low for the other 750 milliseconds. Increasing the frequency we will increase the number of on/off switches (e.g. 50Hz is equivalent to 50 switches per second). For human eye the led will be seen at 25% of the full brightness.

Arduino boards have special PWM pins, to be used as output, listed below:

Arduino IDE has a built-in function analogWrite(pin, value) which can be used to generate a PWM signal for given pin: