Getting started with Arduino Nano

Arduino is an open-source electronics platform based on easy-to-use hardware and software. Arduino boards are able to read inputs - light on a sensor, a finger on a button, or a Twitter message - and turn it into an output - activating a motor, turning on an LED, publishing something online. You can tell your board what to do by sending a set of instructions to the microcontroller on the board. To do so you use the Arduino programming language and the Arduino Software (IDE).

Over the years Arduino has been the brain of thousands of projects, from everyday objects to complex scientific instruments. A worldwide community of makers - students, hobbyists, artists, programmers, and professionals - has gathered around this open-source platform, their contributions have added up to an incredible amount of accessible knowledge that can be of great help to novices and experts alike. 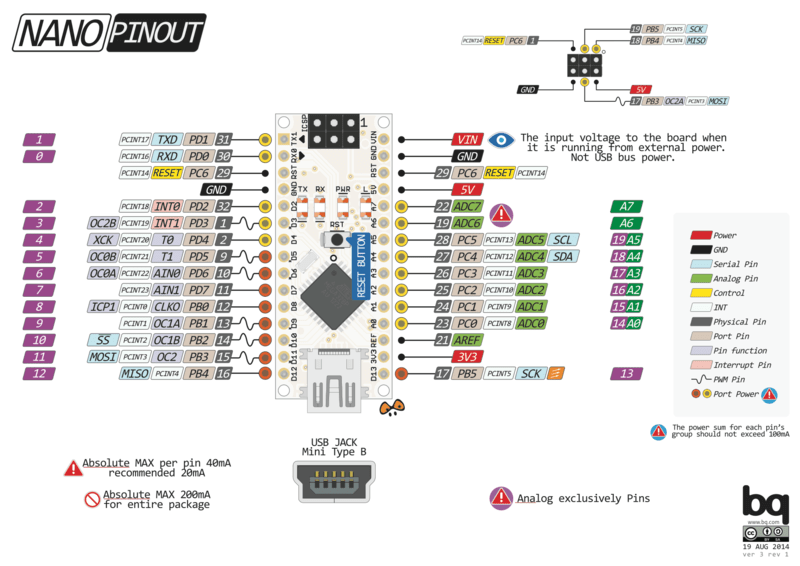 Each of the 14 digital pins on the Nano can be used as an input or output, using pinMode(), digitalWrite(), and digitalRead() functions. They operate at 5 volts. Each pin can provide or receive a maximum of 40mA and has an internal pull-up resistor (disconnected by default) of 20-50kOhms. In addition, some pins have specialized functions:

The Nano has 8 analog inputs, each of which provide 10 bits of resolution (i.e. 1024 different values). By default they measure from ground to 5 volts, though is it possible to change the upper end of their range using the analogReference() function. Analog pins 6 and 7 cannot be used as digital pins. Additionally, some pins have specialized functionality:

There are a couple of other pins on the board:

The open-source Arduino Software (IDE) allows you to write programs and upload them to your board. This software can be used with any Arduino board and it's compatible with most operating systems. It is available for downloading on the official Arduino website. 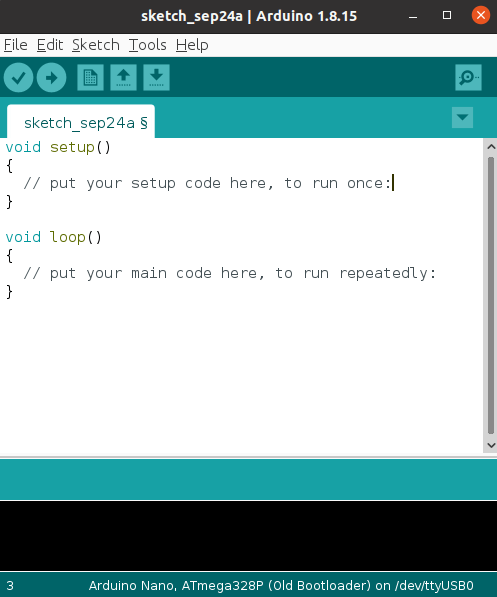 As you can see, the interface is very simple and easy to use. The most used buttons are available on the top (from left to right):

A sketch is a program written with the Arduino IDE. Sketches are saved on the development computer as text files with the file extension .ino.

A minimal Arduino C/C++ program consists of only two functions:

Thanks to its simple and accessible user experience, Arduino has been used in thousands of different projects and applications. The Arduino software is easy-to-use for beginners, yet flexible enough for advanced users. It runs on Mac, Windows and Linux. We have chosen Arduino Nano board because of its power, size and compatibility with other modules. But you are free to choose the board that better fits your project needs.