Docker Compose is a tool for defining and running multi-container Docker applications. With Compose, you use a YAML file to configure your application’s services. Then, with a single command, you create and start all the services from your configuration.

The features of Docker Compose that make it effective are:

Docker Compose files work by applying multiple commands that are declared within a single docker-compose.yml configuration file. The basic structure of a Docker Compose YAML file looks like this:

Let's focus on setting up containers using the services section. Here are some of the common directives used to set up and configure containers:

Let's create a Docker Compose configuration file to run NGINX server with PHP-FPM and have MySQL as database.

We've defined three services in our docker-compose.yml configuration file: nginx, php and mysql. All of them are built using official images available in Docker Hub repository:

Let's analyse and understand each of the services:

Once our configuration file is ready, startup Docker Compose from the same directory (this commands includes the build and run and can be used separately): 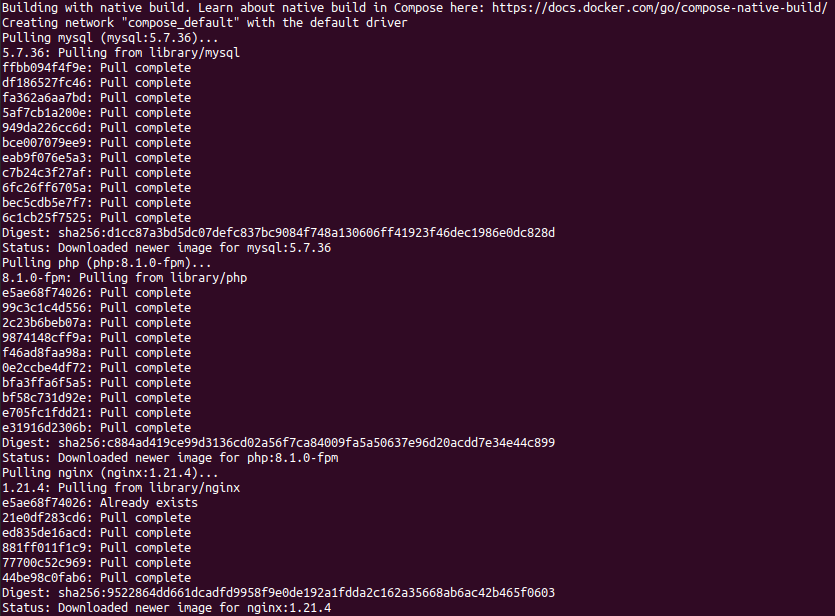 After the first time, however, we can simply use start to start the services:

Note: the -d flag starts the container in detached mode.

At this point, you can visit localhost in your browser and it will load the project you have in repo folder:

To show your Docker containers (including stopped ones), use the following command:

Note: if a container is stopped, the State will be listed as Exited.

To make a change to the filesystem inside some container, you’d take its ID (or easier the name) and use docker exec to start a shell inside the container:

Note: the flag -t opens up a terminal and the -i makes it interactive.

Replace the CONTAINER_ID or CONTAINER_NAME with the corresponding value. In the example below, we access the PHP container and check the version we have installed inside:

To stop the active services preserving containers, volumes and networks, along with every modification made to them we must use the stop command:

In the case you want to discard the changes and destroy everything, run:

You’ve now installed Docker Compose, tested an example and explored some basic commands. Of course, Docker Compose has advanced configurations that makes it very powerful tool to use.