MPU-9250 is one of the most advanced combined accelerometer, gyroscope and compass small size sensors currently available. It replaces the popular MPU-9150 lowering the power consumption, improving gyro noise and compass full scale range performance. It has many advanced features, including low pass filtering, motion detection and even a programmable specialized processor.

Internally it includes the MPU-6500, which contains a 3-axis gyroscope plus a 3-axis accelerometer, and the AK8963, the market leading 3-axis digital compass. The MPU-9250 uses 16-bit analog-to-digital converters (ADCs) for digitizing all 9 axes.

The MPU-9250 is a high performance accelerometer, gyroscope and magnetometer option for use in applications such as gesture recognition, self-balancing robots, cell phones, fitness monitoring and similar applications where detection of movement direction and magnitude along with rotation is desired. In reading MPU9250 sensors with Arduino article we've introduced the module and how to interact with it, now we will see how to use extracted data and get relative orientation.

Connect the power supply pins and SDA, SCL pins according to the connection diagram shown below. 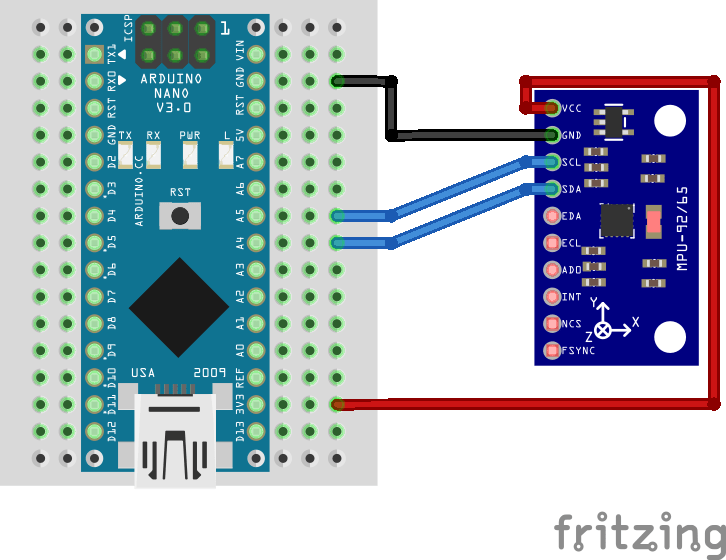 Note: the module operates with 3.3 volts, although some versions have a regulator that allows to connect it to 5V. Make sure to check your module specification before using it.

Relative orientation is the recovery of the position and orientation of one object relative to another. Depending on the direction there are three types of angular rate measurements:

A graphical representation for each axis using a plane: 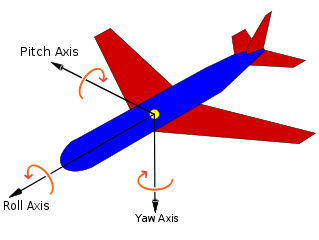 Angles can not be directly extracted from MPU-9250 module but with correct formulas we can obtain them.

Commonly, g is used as a unit for acceleration, relative to standard gravity (1g = 9.80665m/s2). Acceleration for perfectly aligned IMU will be 1g for Z axis. Terrestrial gravity and trigonometry allow to use the accelerometer readings and know the angle of inclination. The formulas to calculate the angles are:

You can not obtain yaw angles from accelerometer because yaw motions occur in a plane and so no matter what X and Y readings you have.

The gyroscope measures the angular velocity, i.e., the number of degrees rotated in a unit of time. Having initial angle of the IMU, angular velocity and the time passed between samples, we can know the angle change. It's very similar to linear speed, that multiplied by time give us the total distance passed. The formulas to calculate the angles are:

Where elapsed time is the time interval between samples. The Z axis is usually ignored, since we don't have yaw angle from accelerometer and we can not rely only on gyroscope sensor.

In the ideal word, sensors data with applied formulas would provide us precise and exact angles. The reality is different as some factors affect the sensors output.

Typically, when you move around with an accelerometer it experiences movement accelerations. Additional acceleration values may affect the orientation accuracy. Another accelerometer related problem is the noise: unwanted disturbance in an electrical signal. The accelerometer is able to measure any angle, however its readings are noisy and have a certain margin of error even with a low pass filter.

On the other hand, gyroscopes are subject to bias instabilities, in which the initial zero reading of the gyroscope will cause drift over time due to integration of inherent imperfections and noise within the device.

So, what can we do? There are different algorithms to solve this problems. The one we are going to use is known as complementary filter. Idea behind complementary filter is to take slow moving signals from accelerometer and fast moving signals from a gyroscope and combine them. It is ideal to implement with Arduino: easy to use, low cost of processing and good precision.

A common value for α is 0.98, which means that 98% of the weight lays on the gyroscope measurements.

As the data changes very rapidly we can sample for some amount of time and take the average for more precise results.

We will use I2C protocol to interact with registers and read/write data. The I2C library provides a very simple interface for that purpose and can be reused in other projects that use I2C protocol. It can be downloaded from our official repository. 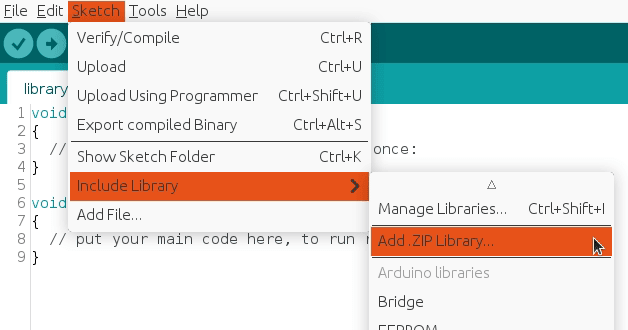 It will include the library with predefined functions to interact with registers.

We are going to reuse most of the code generated from the raw sensors reading. To be more specific, everything related with data reading and normalization, together with defined structs.

The sampling theorem states that a real signal which is band-limited to f HZ can be reconstructed without error from samples taken uniformly at a rate R > 2f. So, it's important to choose an output rate that will be at least two times the DLPF, otherwise the data will be corrupted (aliased).

A new structure has been defined, called angle, to represent object position. Make sure to follow the previous step and import I2C library in order to use it with the include statement:

Note: the snippet is part of Arduino project located in our GitHub repository with the code separated in different logical files.

The serial monitor will print latest available sensors data every INTERVAL_MS_PRINT milliseconds (in the example above, once per second) and it should be similar to:

Usually the orientation is drawn on the physical module so you can easily detect pitch and roll.