A resistor is a passive two-terminal electrical component that implements electrical resistance as a circuit element. In electronic circuits, resistors are used to reduce current flow and adjust signal levels among other uses. Resistance is measured in Ohm with a sign of Ω.

A microcontroller (e.g. Arduino) utilizes I/O signals for communication with external hardware devices, where the most commonly known being GPIO. As a reminder, digital logic circuits have three logic states: high, low and floating (or high impedance). When there’s nothing connected to your GPIO pins, your program will read a floating impedance state, which we do not want. To achieve either high or low states, we’ll have to implement pull-up or pull-down resistors in our digital circuit.

What are Pull-up resistors?

Pull-up resistors are fixed value resistors used between the connection of a voltage supply and a particular pin in a digital logic circuit. More commonly paired with switches, its purpose is to ensure the voltage between GND and VCC is actively controlled when the switch is open. 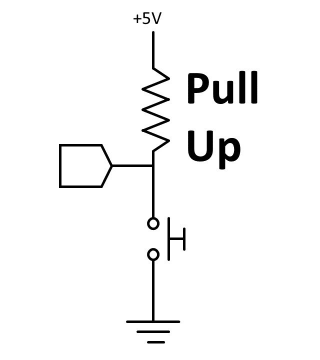 If you require a low default impedance state and wish to pull the signal to high, pull up resistors are the ones to use.

What are Pull-down resistors?

Similarly to pull-up resistors, pull-down resistors ensure the voltage between VCC and a microcontroller pin is actively controlled when the switch is open. However, instead of pulling a pin to a high value, such resistors pull the pin to a low valued instead. Though being less commonly used, a pull-down resistor is still a valid option. 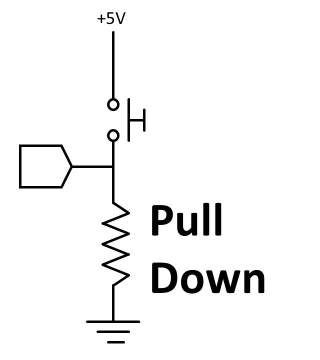 If you require a high default impedance state and wish to pull the signal to low, pull up resistors are the ones to use.

In bipolar logic families which operate at operating at 5V, the typical pull-up resistor value is 1-5 kΩ. Similarly to how we calculate resistance for a normal resistor, we’ll use the formula in Ohms law to know the actual value:

For pull up resistors, the formula for calculating actual value is: Rpull-up = (Vsupply – Vmin) / Isink

On each board there are Arduino internal pull-up resistors built-in, they just need to be turned on in the sketch, usually in setup() using:

When using any kind of open inputs with an Arduino such as switches and push buttons a pull-up resistor is needed for reliable operation. These resistors hold the I/O pin at a known value until the switch forces the I/O pin to a different known value.