When working with any kind of digital system in which numbers are being represented, it is important to understand the different ways numbers are represented in these systems.

In electronics, almost without fail, numbers are represented by two voltage levels which can represent a one or a zero. The number system based on ones and zeroes is called the binary system: because there are only two possible digits. In HTML programming, colors can be represented by a 6-digit hexadecimal number: FFFFFF represents white whereas 000000 represents black.

Before discussing the binary and hexadecimal, let's review the decimal system because many of the concepts will be easier to understand when introduced alongside their decimal counterpart.

The decimal numeral system is the most commonly used and the standard system in daily life. It uses the number 10 as its base, also known as radix. Therefore, it has 10 symbols: 0, 1, 2, 3, 4, 5, 6, 7, 8 and 9. The system gives positions to the digits in a number and uses powers of the base 10; digits are raised to the N power, in accordance with the position.

So, it can also be represented as: 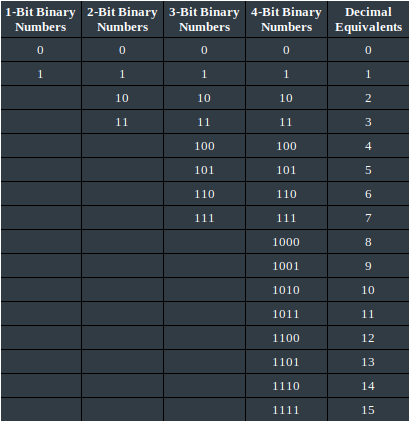 An N-bit binary number represents one of 2N possibilities. With 8-bit we can represent any number between 0 and 255 (28=256 possibilities):

There are a few ways to represent negative binary numbers. The simplest of these methods is called one's complement, where the sign of a binary number is changed by simply toggling each bit (0's become 1's and vice-versa). This has some difficulties, among them the fact that zero can be represented in two different ways (for an 8-bit number these would be 0000 0000 and 1111 1111 corresponding to +0 and -0).

The problems of multiple representations of 0 and the need for the end-around carry are circumvented by a system called two's complement. To represent an N-bit signed binary number the most significant bit (MSB) has a special significance. If MSB is not set the representation of signed and unsigned numbers is the same. However, when MSB is set, the number is always negative. For this reason MSB is sometimes called the sign bit.

The representation of unsigned binary fractions proceeds in exactly the same way as decimal fractions:

Signed binary fractions are formed much like signed integers. Therefore, MSB represents a sign bit just as with two's complement integers. If this bit is set, the number is negative, otherwise the number is positive.

HEX is used in mathematics and information technologies as a more friendly way to represent binary numbers. Each hex digit represents four binary digits; therefore, hex is a language to write binary in an abbreviated form.

The hexadecimal system can express negative numbers the same way as in decimal.

Downloading and installing Node.js and NPM