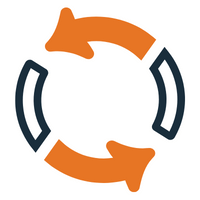 Rsync is a very flexible network-enabled syncing tool. Due to its ubiquity and its popularity as a tool for system scripts, it's included on most Linux distributions by default. It efficiently copies and sync files to or from a remote system. It’s faster than scp because rsync uses a remote-update protocol which allows transferring just the differences between two sets of files. The first time, it copies the whole content of a file or a directory from source to destination but from next time, it copies only the changed blocks and bytes to the destination.